Too slick to be true? 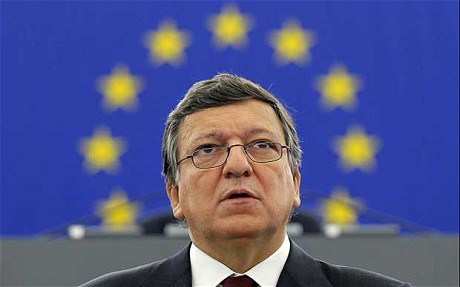 “I believe the proposal approved today […] and presented by the revolutionary students’ commission is an entirely fair proposal […] aiming on the right direction of the combat, made within a revolutionary structure. The Education and Research Ministry […] is supporting the “’students’ civic service” act. [A] symptom of the crisis of the bourgeois Education System! This act is entirely wrong, anti-proletarian… and anti-popular! It throws students against workers and workers against students.”

Who would believe these words from a young Maoist student leader pronounced in 1976 could belong to the first re-elected president of the European Commission? Certainly considering today Mr Barroso is one of the most prominent members of Portugal’s centre-right Social Democratic Party and leading figure of Europe’s right-wing EPP. What a journey he’s made since then!

Mr Barroso is by no means the only Portuguese political leader to have gone through a transformation like that. Anyone of his generation interested in politics – he is now 56 – is likely to have been caught up in the national drama of having to build a democracy after nearly half a century of dictatorship.

José Pacheco Pereira was for many years one of Barroso’s parliamentary colleagues and fellow revolutionary in the 70’s:

“It is really not very important […] that we were Maoists. We were oppositionists, people who fought against the government. You see, when you have 48 years [without] a single day of freedom of the press for instance, it was normal that young people in revolt with this situation tended to be radical. We really didn’t know what Maoism was but it seemed to us the kind of radical criticism we needed in a country where even the mildest criticism was impossible. Barroso was shaped by that experience.”

“He was already very ambitious. I remember people telling me at that time he was known in his high school for asserting that one day he wanted to become President of the Republic of Portugal.”3a

Ana Gomes was a fellow member of Barroso’s Maoist cadre at that time, now a socialist MEP:

“You see, many people – especially in this party – have made the same road from extreme left to the right. I think it has to do with the fact that for them, principles and ideology don’t matter. The way he has been steering his political career clearly shows that he’s not driven by money. He is not a corrupt leader, but he is driven by power. He wants to stay in power and to exercise power. What for, that’s another question…”3b

Mr Barroso made his move in mainstream politics in 1980 when he joined the Social Democratic Party where he progressed with frightening speed. A junior minister within 5 years, he was responsible for Portugal’s Foreign Affairs by the age of 31 and Prime Minister in his mid-forties.

In the spring of 2003, as Portuguese Prime Minister, Mr Barroso acted as host for George Bush, Tony Blair and the Spanish Premier Jose Maria Aznar and this rather modest “coalition of the willing” endorsed the invasion of Iraq. The Blair government rewarded him therefore. The following summer his attention turned towards the top job in the EU’s bureaucracy and Britain supported him enthusiastically. Charles Grant of the Centre for European Reform (CER):

“British politicians have always found Barroso quite congenial because his view of the world is fairly much in line with the British thinking in that he is an instinctive Atlantist who thinks Europe should work closely with America. He’s been a free-trader and he’s not particularly desperate to give more power to the EU institutions all the time. So, for all those reasons, British have liked him and that’s why I think Tony Blair pushed him into getting the Commission’s Presidency.”4

It is a formidably difficult job. The President has to make every institutional pillar, namely the Commission, the Council and the Parliament, feel a little bit loved. From his arrival in Brussels Mr Barroso showed himself rather apt at that. Some thought rather too adept in fact. Martin Schulz is the leader of the socialist group in the Parliament since 2004:

“When I saw how he behaved to the different groups, my impression was that he is a very good actor. To the Christian Democratic group he was a real Conservative and to the Liberal group, a marked Radical and after his meeting with the Socialists some colleagues of the group said that they thought he was a former extreme left-wing man. So, someone who’s a good Christian Democrat on Monday, a good Liberal on Tuesday and a real Socialist on Wednesday, what is he? A good actor…”5a

Mr Schulz certainly admits being impressed by Barroso’s character but when asked if he likes him:

”[laughs] No, I don’t like him. He’s a partner I have to deal with but I never reflected on the question if liked Mr Barroso. I have to work with him.”5b

The European Union has been profoundly transformed during Barroso’s first term in office. Since 2004 – the year of his appointment – membership has grown from 15 to 27 and part of his job has been to sell what he sees as a remarkable success story to an often sceptical European public. There he’s talking in 2007:

“We have 27 countries that freely decided to work together, to pool their sovereignties if you want to use that concept. I believe it’s a great construction and we should be proud of it.”6

If there’s a hint of the academic he once was in those carefully chosen phrases, you can – if you listen carefully – also detect echoes of the old revolutionary student in the way Mr Barroso has dealt with the accession of new members. Charles Grant again:

“Having come from a dictatorship that underwent a democratic transformation he probably does understand pretty well the problems that the East and Central European countries have faced in modernising and moving towards the EU and trying to persuade the governing elites is going to take years of patience. But he also understands that once they’re in, they will probably reform quicker than if you leave them on the outside and shut the door in their faces.”7

One of the big ideas for which Mr Barroso gets credit is a common European approach to climate change. One of his highpoints was that the EU’s members had agreed how much to pay developing countries to help fight global warming:

“We have a clear and unified European message on climate’s finance. We can take this message to Washington, to New Delhi, to Beijing or anywhere else. Next Tuesday, Prime Minister Reinfeldt and myself are going to meet with the American President and we’ll say: WE ARE READY!”8

But the biggest question today remains to see if Mr Barroso will be ready to face the toughest challenge the EU has ever been confronted with.

An on-going crisis calling to profoundly re-define European cooperation mechanisms like the Stability Pact or the recently debated Banking Union clearly stress out internal tensions the institutions have been able to overlook for years. The latest debates on the future EU budget for example highlight the diametrically opposite stances between Britain and Germany.

Here Mr Barroso pulls out all the stops, even bringing up the infamous F-word out of the closet. In his latest State of the Union address he indeed called for a “Federation of Nation States”, stating “A political union also means doing more to fulfil our global role and sharing sovereignty in Europe means being more sovereign in a global world”, giving his discourse some of his old revolutionary sensibility. But can his input and ideas really prevail when tensions between the biggest member states are still growing? Only time will tell…

(PS: I apologise to the reader for not yet having sourced all the quotes used in this article.)

About the Author: Micha