Skip to content
Previous Next
Processed food in the EU: cheaters and liars 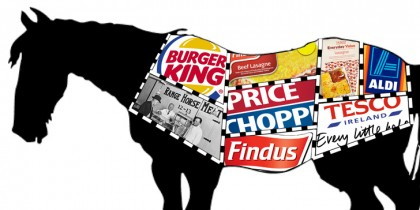 The latest EU-wide food scandal sparkled across various European nations – such as France, Great-Britain, Germany, Sweden, Romania and Cyprus – leaving the consumers with the impression of being fooled since the beginning by all the different actors along the food production line. From the political leaders to the tenors of the agribusiness – not forgetting international authorities “supposed” to provide citizens with at least “some” guarantees about the quality of their food – Europeans haven’t got a single clue on who they can trust anymore.

The whole intrigue started with “100% bovine” burgers tampered with horsemeat found in Ireland on the 16th of January. Two weeks later, leading giants of the agro-industry such as Tesco, Aldi or Findus were forced to remove a whole variety of products labelled “pure beef” from the shelves. After inspection, some of the products show appalling results with levels of horsemeat reaching as high as 60%!

According to the French General Directorate of Fraud the scandal involved more than 750 tons of meat in less than a month. Among them, 550 tons have been used to manufacture more than 4.5 million meals sold fraudulently in thirteen European countries.

In England, the epicentre of the scandal, meals containing horsemeat were found in forty-seven schools. « The overwhelming majority of beef produced in this country does not contain horsemeat. These examples are totally unacceptable, but they are the exception » said Catherine Brown, Director of the Food Security Agency during a press conference in London – doing her best to sound reassuring. Nonetheless, similar discoveries were made all across Europe, with horse steaks found in Irish hospitals, similar traces in Norwegian lasagne and Danish pizzas.

In France, the main distributor of the incriminated meat – Spanghero – was accused and brought to justice at the speed of lightning. It felt almost as if the French government thought wise to make an example towards its citizens, hoping it would appease general ire and enable them to return to current affairs as soon as possible. Benoît Hamon, French Minister in charge of consumption, ensured the company Spanghero « knew it labelled horse meat ‘beef’.” Spanghero is guilty of an « economic fraud » and will be sued accordingly, he added, promising to « clean up the industry. »

Most probably Spanghero knew indeed it was selling Romanian horsemeat. The real question remains: to what extend is this just a sad example of general practice reaching through all networks of big distribution networks.

The European Union advocates more controls… by the industry itself!

Maybe time has come to reflect on stronger European regulation capable of imposing strong decisions at supranational level; in particular when huge economic interests are as much at stake as core modern democratic values impacting human health. But which countries would show brave – or mad – enough to “frame” the Single Market rules?

In politics – like in humour – timing is essential. Unfortunately, in this case, the audience can’t just leave the theatre hoping for a better representation next time. As if things weren’t bad enough and public trust wasn’t already too badly hurt, the European Commission not only – quite weakly – centred its communication around better food labelling and the usual promises of better consumer information. On a global level, the EU seems decided to continue trusting the effectiveness of self-regulatory and legislative frameworks put in place to address malpractices at national level.

To add insult to injury, on the 14th of February, members of EU’s executive body took a break from the current scandal to reauthorize the use of processed animal proteins (PAPS) derived from non-ruminant animals like pork and poultry. Off course, this was done despite a very negative report from the European Food Safety Agency (EFSA).

This type of animal feed was banned in 1997 to battle mad-cow disease, an illness that infected nearly 500,000 animals in Europe and killed around 200 people. Nevertheless, the Commission considered that the ban in place for over ten years was disproportionate to the risks incurred. “The risk of transmission of TSE [transmissible spongiform encephalopathies] from non-ruminants is negligible, since cannibalism is avoided…” seems to be the message coming from Brussels.

Starting now with an authorization to feed PAPS to fish, the Commission intends to propose an alternative measure to reintroduce the use of this highly controversial substance to poultry and pigs themselves in 2014. As a precautionary measure, cannibalism (within the same species) is prohibited; poultry cannot be fed with poultry meal, but only pork, and vice versa. Processed animal proteins remain however prohibited in ruminant feed (cattle, sheep and goats).

Those “spongy” arguments remain very unconvincing for some environmentalists. « We’ve never seen fish tackle swine or poultry », says the Green Member of the European parliament José Bové.  Furthermore, and the latest horsemeat scandal should convince the greatest sceptics: « Nothing prevents, once animal proteins are reintroduced in the diet to end up being used the day after on animals for which they are not intended. » The French MEP requests specific labelling « nourished with » or « without animal meal » as a starting measure. European consumer associations on their side, call national governments to suspend the measures taken, threatening to call for a boycott of farmed fish starting on the 1st of June.

Isn’t it sad that the closest images coming to mind when summing up the latest events come from a low-grade American B-movie? The latest cinematographic references to mad-cow disease and its consequence bring us back to the movie “Zombieland” (2009) in which – after being contaminated by infected animals – the virus spreads to humans turning them into flesh-eating zombies bloodthirstily taking over the world.

Isn’t it now time to stop all this uncontrolled madness from taking over the world and start reminding ourselves at least some of the basic ethical duties due to any living creature priding itself from being called a human being? Let’s just hope we don’t need a unanimous decision before we start acting…

About the Author: Micha